On April 20th, 2017, Jenna McKenzie spoke to the University of Toronto Earth Science graduating class at the "Earth Ring" ceremony.

The Earth Science Ring Ceremony, is a ritual of welcome into the profession of newly qualified geologists and geophysicists was started in Alberta in 1975. The ceremony carries many of the same passages written by Kipling for the Engineers' Iron Ring Ceremony, and symbolizes the commitment and responsibility that come with geoscience profession. The ring is marked with the cossed hammer of geology, and with the seismic trace of geophysics.

The University of Toronto private ceremony was held at the Faculty Club, MC'd by Dr. Ed Spooner. Speakers included Jenna McKenzie, Ronacher McKenzie Geoscience, and James Whyte, Ontario Securities Commission. Jenna and James also participated in the ceremony by awarding the rings to the 2017 graduates. 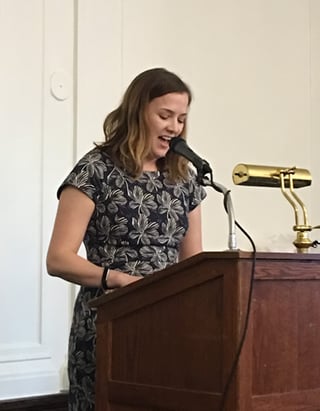