Exploration'17 Wrap-Up: Reflecting on the Past Ten Years, and Thinking About the Next Ten 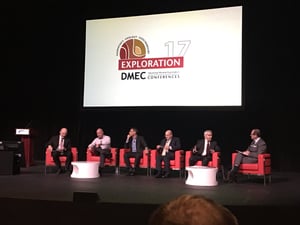 Exploration ’17 took place in Toronto in late October. In what felt like a bit of a whirlwind, geologists, geophysicists and geochemists gathered for a week to discuss the progress that was made in exploration during the last decade and what we expect to happen in the next 10 years. It was quite a conference, with a lot of fantastic talks, new information and thought-provoking discussion. We at Ronacher McKenzie Geoscience are still digesting the takeaway messages, but here are a few key highlights:

Exciting things that are happening NOW:

Richard Hillis talked about coiled tubing drilling and real-time sensing as a new and disruptive approach to mineral exploration. An entire session focused on the technological advances of hyper-spectral core imaging in the last decade. The presenters concluded that hyper-spectral core logging is revolutionizing mineral identification and provides invaluable mineralogical information, including information about spatial variability and the genesis of ore deposits.

In the geophysical world, the airborne gravity gradiometer HD-AGG system developed by Gedex Systems Inc. is now commercial, achieving a noise performance goal of 1E/√Hz. This highly sensitive system will detect subtle changes in the Earth’s gravity field, and will help improve the subsurface geological understanding and potentially be a transformative technology in the exploration geophysics industry. There is also rumour that full tensor magnetic gradiometer systems using SQUID sensors will soon be available, and we eagerly await those announcements. Fixed wing frequency-domain systems are being designed to be competitive with light fixed-wing magnetic aircraft and could be considered as the new low-cost default mapping tool. UAVs continue to be explored for their payload and ability to add different sensors.

Geophysically, we are excited to see systems that can measure the full potential field tensor, such as the MAGSQUID, move towards commercialization. The ability to differentiate permanently magnetized bodies, or anomalously dense bodies could have very large impact on discovery of new ore bodies.

Machine learning was also discussed as a means to analyze the massive amounts of data that exploration produces today. The human brain’s ability to integrate in hyper-dimensional space is limited and therefore we have started to create powerful algorithms that will allow us to predict more efficiently. Machine learning is a means to “augment” human capabilities. Guy Desharnais stressed in his talk that experienced geologists will be required to evaluate the machine learning results to “ensure that the model does not merely predict what is already known or provide spurious results.”

Diversity still proves to be an issue, and it was discussed both publicly at the open forum, and privately amongst the attendees. We feel that the general feeling of the mining industry is that we need to overcome this and are hopeful as we all start to address unconscious biases going forward. The Frank Arnott awards were a notable example of bringing together diverse teams and showing some exciting results of integration.

Furthermore, the challenges around data integration were discussed during throughout the conference. Mike Lesher of the Harquail School of Earth Sciences and CIMC noted that data integration is taking a lot longer than first initially thought, as it takes time and shortcuts cannot be taken. Cam McCuaig also noted that as individual geoscientists (geochemists, geologists or geophysicists) we all speak a very specific language, which is a bit of a barrier when trying to integrate our disciplines into one interpretation product. David Pratt further noted that industry is afforded less time than academia to build full and complete models based on all of our datasets.

Cam McCuaig quoted from the book “Ego is the Enemy”. “Everyone is right but everyone is incomplete”. We need to integrate ALL of our data and work together in a creative new way to address the challenge of discovery. We at Ronacher McKenzie are ready for the challenge.

Jenna McKenzie is co-founder and Principal Geophysicist of Ronacher McKenzie Geoscience Inc., a consulting firm focused on the integration and interpretation of geoscientific data. She is passionate about exploration and has extensive field, processing, inversion and interpretation experience with ground and airborne geophysical methods in early exploration and advanced mining scenarios. Her consulting experience includes multiple commodity and deposit types including diamond, gold, potash and lithium, and porphyry copper, VMS and Sedex. Jenna is currently on the executive of the Canadian Exploration Geophysical Society (KEGS) and volunteers as Conference Secretary of Exploration ‘17, a Decennial Mineral Exploration Conference (Exploration17.com).